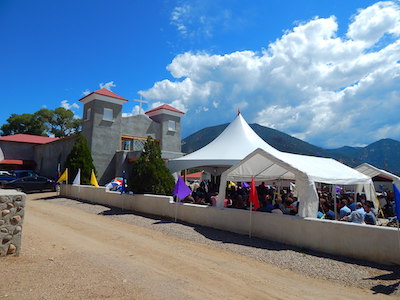 It took five years, 41,000 volunteer hours, and the devotion and effort of the people, crossing all faiths and borders, to repair a divide in the community and resurrect St. Anthony’s Church. In 2008, the 170-year old walls of San Antonio de Padua Catholic Church (St. Anthony’s Church) in Questa collapsed. This created a divide in the community, those who felt it wasn’t worth saving and those who felt it was worth saving. Demolishing the church was not an option for a group of volunteers who began the project to save the Church. After the restoration started, it became apparent, to all of the people of Questa, that the importance of keeping the structure was about more than adobe bricks. It began to attract more and more volunteers, lessening the divide and re-connecting the community. “It’s the center of our roots here in Questa. It’s part of our culture, of our history. This church is really important to the people in this community,” said Esther Garcia, Volunteer. The Catholic Foundation is honored to be a part of such a historic event. In 2015, the Foundation granted San Antonio del Rio Colorado Historic Preservation $7,000 to help pay for the construction of the tower-portal-lobby that was a part of the historical restoration of the San Antonio de Padua Catholic Church building in Questa, NM.